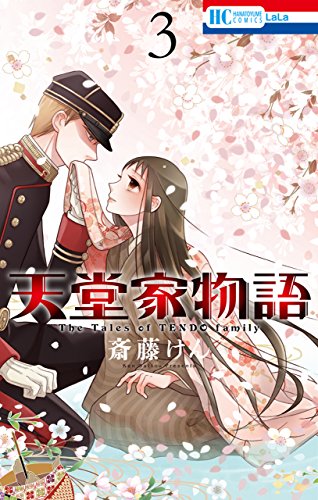 Finally got around buying the 3rd volume of Tendou-ke and I’m so glad that it came with the obi (the wrap around the book jacket). I like how the black and muted gold colour goes together. The lines used on them are also dialogues from respective volumes.

Now, I only realised in this volume that Masato is only almost 17 years old. Which means he is still a student. I mistook him for a military man (;^ω^)

According to the author, this volume took a break from the thrilling developments of the family but while delving into the other facets of the characters, it also gave us a glance of Masato’s siblings.

Ran continues her servant work and studies (she has finally gotten better at calligraphy!). The search for the real Houjou Ran continues but due to coming events, Tachibana decides that it’s better to dedicate whatever time left to train (fake!)Ran for the upcoming tea party.

We see more of Akira and Amane, Masato’s twin siblings. I’m not sure how they are related, however, but whatever they plan will definitely be sinister. (LOL)

The behaviour of Misao, Masato’s aunt and his father’s younger sister also hinted a certain past between her and Tachibana. The reason of Tachibana’s gloved left hand also has a connection to Masato’s father, Takato.

It’s super adorable to see how Masato likes Ran and how their feelings are growing? He tries to kiss her with the konpeito bait but with Ran’s (almost superhuman? ww) hearing abilities, Masato’s chance passed LOL

There is also the side story (or rather the backstory for the opening in chapter 9) of how Akira had to handle the aftermath of Amane (dressed as her) taking her tests and toyed with a girl’s feelings. It’s interesting how much Akira says she loves Masato. I want to know more about the entire Tendou family lol

As a bonus, I also bought the one-shot that was published in AneLaLa. It’s a short story about how Ran had to go through when Masato wanted to sleep on her lap. It’s funny and Tachibana was like ‘I won’t play a part in this’ LMAO

Buy links at the bottom!

Volume 4 will be released in Winter 2017 and Amazon Japan has a release date of December 5!

Next volume coming winter 2017!!! Vol 3 is a breather and allowed some other characters to develop and further unfold… 次巻楽しみ😍💖 pic.twitter.com/F7ytDDZ24a

Hi! If you're new here, check out my Guides to enjoying Japanese content outside Japan, Translations and Games posts!

Need an English translation and you don't read Japanese? I'm open for Japanese to English commissions!

Fill this form! Expect replies to come within 1-2 working days.