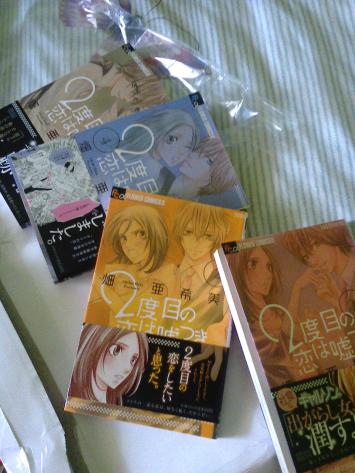 This series was one series that I have been waiting to read for a long time. (Note: It’s a josei manga, serialised in Shogakukan’s Petit Comic.) I bought this off Amazon Japan and for some reason, I ngelected to check the item description and only has 4 volumes instead of a complete set.

Contemplating to buy the last volume off LINE Manga. Will feel lonely without a hard copy but the economy that comes with it! Don’t need to struggle with my already bursting bookshelf /o/

Her new titles after Nidome no Koi wa Usotsuki are Ijiwaru Syrup and a serialisation called Kata’omoi Shoten (かたおもい書店) that just started in Petit Comic’s 4th issue this year. It’s about a new employee who finds herself in-charge of the comic section of a major bookstore and a charismatic bookstore assistant (書店男子) that manages the sales floor. The illustration looks lovely, can’t wait to see the compiled volume 🙂

Her new series, 30-kin which was adapted into a TV drama!

Hi! If you're new here, check out my Guides to enjoying Japanese content outside Japan, Translations and Games posts!

Need an English translation and you don't read Japanese? I'm open for Japanese to English commissions!

Fill this form! Expect replies to come within 1-2 working days.